Lessons from the past, on visibility privilege and perception.

My hippie parents and myself have been travelling across India for 2 months.

The temperatures are over 45°C most days.

I'm talking here about a kind of travel that excludes any type of air conditioning, real comfort or luxury, and includes backpacks, flowery dresses, public transportation and dodgy hotels.

As a choice. my dad in particular was very keen on “meeting the locals, living like they do” and so forth.

Of course that still meant not drinking water when a pill of Nivaquine had not disinfected it and other measures of basic survival.

Back to my story.

Here we are. Waiting. For hours on end. For a train to arrive and take us to Jaipur.

The train is late.

My Swiss clockwork obsessed father had us arrive to the station early.

The train is very late.

I gave up the last  two seats to my parents.

I am 13 years old, blonde, rather plump,  white skinned,  wearing a white T-shirt and a flowery skirt.

There is a crowd of Indian people in that train station, walking and standing, sitting and even lying on the floor.

I feel like I'm in the middle of an ant hill, a hive of activity,  all dark coloured.

Slowly I come into the realization that we are, that I am, in the middle of a circle that has formed around us.

There must be 100 people around us, and I, the blonde, white girl, am the centre of attention.

They are looking at me.

I am the oddity,  the rarity.

Remember, this is 1980, in a remote train station…  Mass tourism hasn't reached there and then.

The heat,  the pressure,  the weirdness.

Literally collapse to the floor.

It seems my brain and my body have no choice.

Too visible to be bearable.

I choose to disappear.

So symbolic don't you think ?

Did that ever happen to you ?

Maybe in a less obvious way.

I have no choice but to disappear.

I have come to understand that this event has shaped part of the way I am (or not) visible in the world.

And every time I become too visible, I choose to disappear for a while.

I don't faint anymore…  but I do vanish from social media for instance.

Does that ring a bell ?

Have you ever realized that those small events in your life shape the very way you act and react still today ?

It's not always the big traumatic things. Sometimes it's the little things.

And I also learn how to react by hiding, by choosing to disappear.

It took me years to really understand, to unravel the why and the how, and then some more decision-making and time until I stopped doing that, and choose to do something different. 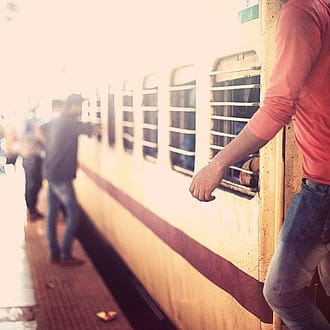 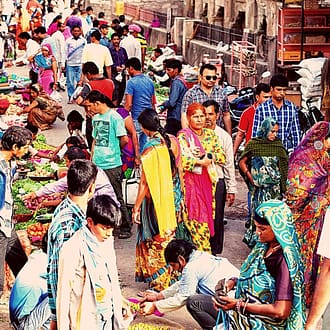 But the event I was describing did not finish there.

There is a follow-up,  up.and it comes with an altogether different lesson and message.

As soon as I faint, immediately (and I've been told all that I don't remember it) a well dressed man comes to the rescue,  signals the crowd to leave, brings a small electric fan and some water for me to drink (which I won’t, Nivaquine and all).

He explains in English to my parents that he's waiting for the same train as we are, and will find a way for us to be in his 1st class compartment, “so your daughter can fully recover in peace”.

By then I have come to my senses,  and my mum has given me her seat.

So here I am, recovering and being altogether pampered.

And the Indian “gentleman” keeps his word. By some magic, the four of us end up in the same first-class compartment ( I know for a fact my father did not pay 1st class...He would have felt such a traitor to his hippie values!)

And my mum and dad, very grateful nonetheless, start a conversation with the man.

The train has not moved for an hour.

We are still waiting for it to depart.

The whole situation is quite friendly and I can see my father relaxing …  he seems to have finally found someone to talk to, a “local” that actually is interested in an intellectual exchange, not a mere commercial one (my parents had a lot of their hippie dreams ripped from them during this trip and … wait for more…)

At some point,  a crippled, obviously very poor and sick man, barely able to walk with old wooden crutches, who was passing by our train on the platform, this man literally collapses inside our compartment… on the floor.

And the gentleman, the Indian man my father and mother had made friends with, the man who had dispersed the crowd, telling the people I needed air and to leave us alone, this friendly man, clearly a person of high caste, simply kicks the old crippled sick man out of the train.

Like you wouldn't a dog, as a matter of fact.

We are stunned, shocked, appalled.

Without doubt, the crippled man was an untouchable.

And I am not here to discuss the virtues and vices of the Hindu religion and society.

That was the day (and remember I was 13) I understood privilege.

I was and am forever a privileged one.

And there is NOTHING I could do or say that would change that.

Nothing I did, nothing I had,  nothing I was, granted me this privilege.

I can never unsee or forget that event.

I can never answer or forget my privilege.

I know it in my cells now.

And it comes with a huge responsibility. I will come back to this.

What those two stories have in common is perception.

How I see the events.

How I see the people around me.

White, Indian, poor rich odd one out or not …

I create my world with my perceptions. And then with my reactions, my actions.

As from that day, I consciously decided to create a world where equality exists between humans.

I focus some of my energy on treating everybody in the same way, on challenging my bias and I never, ever forget that this privileged status gives me a responsibility to act.

Because I can, when others can't.

Because I have a voice.

Because I am white, rich, and free.

Even when I feel I'm unhappy, not rich enough, discriminated against for being a woman, not free enough, less privileged than others, etc.

I remember the old crippled man, whose life seemed to have no value,  whose mere existence had no worth.

And feel so friggin lucky.

I'll be happy to hear from you on these few great ideas. Thank you in advance for your comment.
So much for today ...
See you soon, for my next online adventures!
Until then I send you love, light and gratitude.
Isaya

Twilight thoughts (not THAT twilight)